UAE doctors urge cautions after the end of Midday Break

UAE doctors urge cautions after the end of Midday Break

Doctors warn it is imperative for labourers to take precautions when working outside in the heat, with the midday break rule no longer in effect. Yesterday was the last day this year that companies were required to give workers two and a half hours off in the heat of the day.

But with temperatures verging on 40°C forecast for the rest of the week, heat-related health problems still pose a very real hazard for the workers, many of whom are required to work long hours outside in heavy clothing.

Ideally, labourers should still be allowed at least a one-hour break at midday, said Dr Ahmed Bahaa, a general practitioner at Burjeel Hospital.

“The weather here is very hot and it’s dangerous to work outside, particularly around midday,” Dr Bahaa said. “Between 11am and 3pm are the hottest times.”

He said breaks were particularly important when temperatures exceeded 45°C.

“Workers should drink a lot of cold fluids too,” Dr Bahaa said. “Every hour, or hour and a half, they should take a rest for 15 or 20 minutes in a cool place.”

Those who fail to take such precautions will suffer and could even die, he warned.

For those who are not treated promptly and properly, even more severe symptoms may include heat stroke, coma and death. Death becomes likely when body temperature exceeds 41°C, said Dr Bahaa.

“When it’s hot and humid, they lose a lot of sweat, water and electrolytes,” Dr Azeem said. “There is a part of the brain called the hypothalamus, which contains the hypothalamic thermoregulator control mechanism.

“This reacts to the change in environmental temperature and adjusts the body temperature in extreme heat and cold.”

In extreme heat, especially with humidity, people need to help their body adjust to the temperature by taking breaks, drinking water and keeping cool, he said.

“We should not let these people work outdoors in this temperature for long periods of time,” Dr Azeem said.

“They must take breaks, ideally between 11am and 3pm, even if it’s just one hour like between 12pm and 1pm.

“They must also drink lots of water, not wear heavy clothes, take lots of shade, and if they have diseases like hypertension, diabetes, epilepsy and others, they should not be allowed to do such type of work because this increases the risk of heat-related disorders.”

Another doctor, who works at a private medical centre for workers, said this summer he saw up to 10 cases of dehydration and two of tetany, or muscular spasms caused by low calcium levels, a day.

Workers can develop the condition if they spend too much time in the sun, perspiring while not replenishing lost nutrients. It can lead to leg cramps and “clawing” of the hands, he said.

“We give them a 1,000 to 1,500cc intravenous drop of calcium, magnesium, potassium, salts and other nutrients, and then they’re OK,” the doctor said.

Some of his patients said their companies did not give the mandatory breaks, and companies have been accused of failing to provide adequate health care, conditions, water and nutrition.

“The Government, the municipality and leadership are so nice. They show so much respect and have set such kind rules for the labors, but some companies do not follow them,” said the doctor.

The midday break was introduced in 2005 for workers at uncovered building sites. Labors were initially given a break from 12.30pm to 4pm off in July, August and September. The break was shortened in 2006 so that it ended at 3pm. Last summer, more than 50,000 worksite inspections found only 109 breaches. 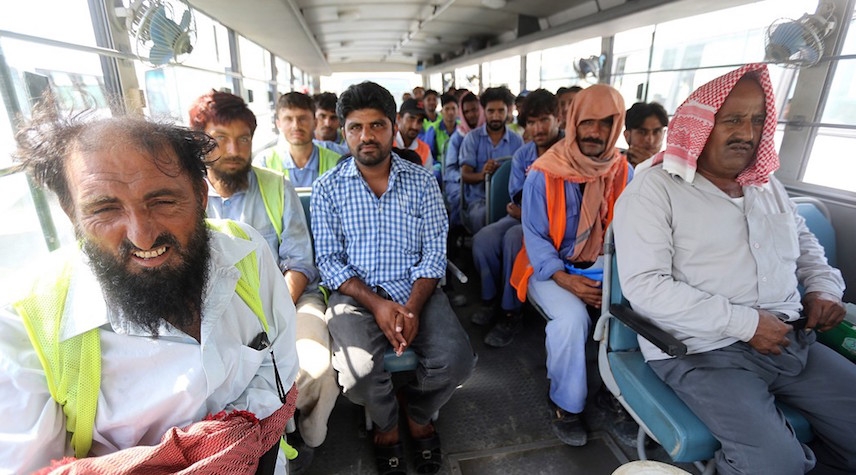