A long-lasting heat wave centered on the Chinese city of Shanghai has moved northeast into Japan and Korea, shattering high-temperature records and killing at least 10 people over the past week in those countries.

“In the five years I’ve been in Japan, this has easily been the hottest summer,” said Perry Constantine, an American from Des Plaines, Ill., who now teaches English in Japan’s southern prefecture of Kagoshima.

Before he adjusted the cooling system in his home, Constantine said, “I would wake up at 4:30, 5 in the morning just from the sheer heat.”

Temperatures in Shimanto, a city in Japan’s Kochi prefecture, reached 105.8 F yesterday, the highest temperature ever recorded in the country.

July and August maximum temperatures in Tokyo normally hover around 30 degrees Celsius (86 F), the Japan Meteorological Agency’s website shows, although this number has been rising in recent years.

Hospitalizations rise, with no end in sight

“The heat wave issue is very concerning in Japan now,” said Yano Katsunori, second secretary of the environment at the Embassy of Japan in Washington, D.C., noting that the nation has suffered from unusual heat throughout the summer.

Over the course of July, 23,699 people in Japan were hospitalized due to heatstroke, according to Jiji Press, with 27 dying.

The heat wave is due to a high-pressure area that has stalled over south China for weeks and is now moving northeast, said Dale Mohler, senior meteorologist with AccuWeather.com. “We’re starting to see it flex its muscles a little bit and expand,” he added.

But unless a typhoon were to move ashore and into the region, bringing rain and changes in air patterns along with it, there doesn’t seem to be any relief in sight.

“I don’t think any potential tropical storm or typhoon is going to be big enough or move into the right spot to really bring an end to this heat wave,” Mohler said.

“When you get to a month, you usually see the end,” he added. “But I don’t see the end right now.”

Because of “unprecedented power shortages … expected over the summer due to higher temperatures than previous years,” South Korea’s Ministry of Trade, Industry and Energy (MOTIE) issued a warning earlier this summer that it would impose energy restrictions on businesses using more than 5,000 kilowatts of energy.

“Additionally, during peak demand hours, public institutions and buildings with higher electricity demands will be required to turn off their air conditioners every 30 minutes,” the ministry said.

Yesterday, The Korea Times reported that blackouts are “looming as a real possibility” as two of the nation’s power plants suspended operations.

In the article, Kim Jun-dong, deputy minister of energy and resources policy at MOTIE, called for “cooperation from the public and private sector to avoid a nationwide power crisis.”

In China, clearance procedures for thermal coal imports have been fast-tracked to make up for the region’s increase in power consumption, according to the Chinese government’s official press agency Xinhua.

China has struggled with record-high temperatures since early July. On Wednesday, Shanghai broke its previous record of 105.1 F — set less than two weeks before — as the mercury rose to 105.4 F.

“If it’s not the hottest, it’s certainly in the top five hottest Augusts ever in that part of China,” Mohler said. “We’re on that kind of a pace.” 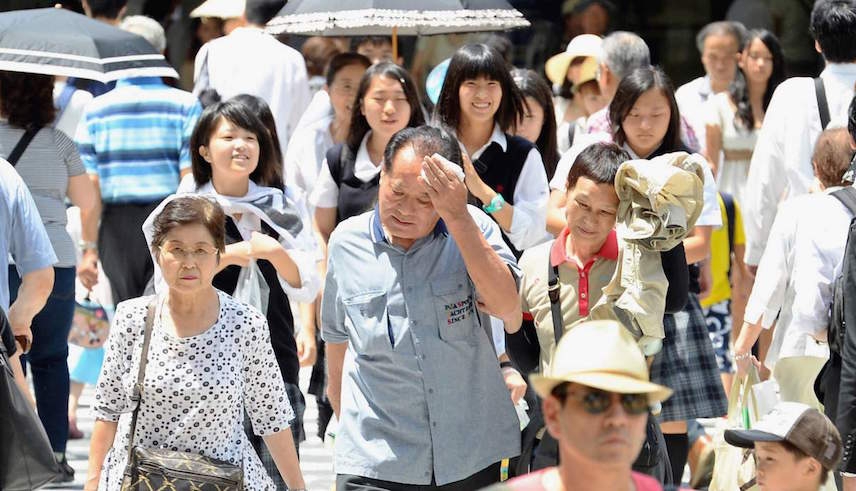