The partnership marks a milestone to launch in the Japanese market

The agreement brings together Scarlet Tech’s expertise in the wireless anemometer technology and Sato Shouji’s well-established sales and marketing channels in Japan.

The wireless anemometer is one of Scarlet’s best-selling product in several global regions including the Middle East, North-Western Europe, Australia and the APAC market. Japan has been one of the targeted markets that Scarlet originally aims to expand by 2025. It is exciting to know that the goal is achieved earlier than planned.

“We are honored to be the first to see the potential of this product and bring it into the Japanese market. It has been received very well so far by the locals and we are optimistic to see an increased sales growth in coming years” said Kosuke Ambo, the Managing Director of Sato Shouji Inc.

Dr. David Huang, Managing Director of Scarlet Tech added,“We are confident with our product quality. We believe that Scarlet wireless anemometer can compete well in the Japanese market.”

The partnership of Scarlet Tech and Sato Shouji Inc. strengthen connections and commitment for new market expansion to Japan.

For more information about Sato Shouji Inc., you can visit the official website here. 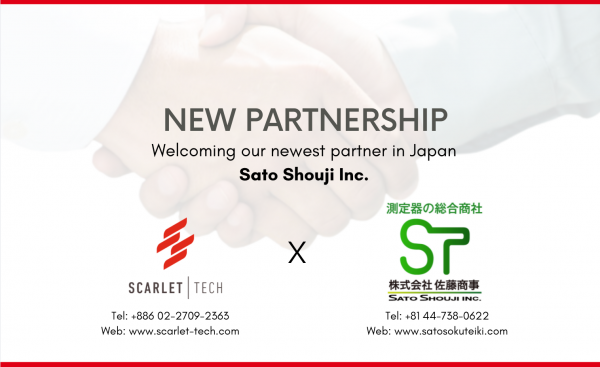