Heat Stroke Cases Spike in Japan as Summer Kicks Off

Heat Stroke Cases Spike in Japan as Summer Kicks Off

Wall Street Journal – 8 July 2013. An NHK tally of people rushed to the hospital for symptoms of heat stroke hit about 900 people nationwide on Sunday alone, when the Japan Meteorological Agency recorded over 20 areas in Japan that exceeded temperatures of 95 degrees Fahrenheit. Some of those who fell ill on Sunday included fifteen marathon runners in both Aomori and Tottori prefectures and ten junior high school students in Saitama Prefecture who fell ill while participating in a baseball game.

The people who became overheated due to the stuffy temperatures on Sunday will be added to the already long list of people suffering from heat stroke during an unusually warm rainy season. The Fire and Disaster Management Agency’s monthly report for June shows that in the period of May 27 to June 30, the number of people nationwide rushed to hospitals by ambulance due to heat stroke doubled from last year, from 1,837 in 2012 to 4,278 in 2013 with people 65 or older accounting for 49%.

According to data released by the “Call for Heat Disorder Prevention Project,” a joint NPO-private sector-government collaboration, while children between the ages of 7 and 18 are most apt to get heat stroke from overdoing outdoor exercise, for all other age groups, the likeliest places to get heat stroke are at the workplace or at home, especially for the elderly. The data came from 2010, before energy conservation became a nationwide campaign in the aftermath of the 2011 Fukushima nuclear disaster, which prompted more people to reduce the amount of electricity they use in their homes and offices.

Not everyone may be taking the appropriate steps to guard against heat-related illnesses. While the Ministry of Economy, Trade, and Industry has said that the government encourages people to limit “unnecessary” usage of air conditioning, what may be considered unnecessary to younger generations, such as turning the system off when leaving the room, can mean something different for older generations, who may opt not to use it at all.

“The elderly in Japan don’t like to turn on their air conditioning because they don’t think it’s good for their health. They feel that they are fine without it because they didn’t get heat stroke when they were younger and didn’t use cooling systems, but Japan has become much hotter in the summer than it was back in the day,” Dr. Yasufumi Miyake of the Japanese Association for Acute Medicine told JRT.

“They are also more serious about following energy conservation measures than younger generations. If they’re encouraged to reduce usage, they will try to endure the temperatures even though they’re at the highest risk for heat-related illness,” he added.

The Ministry of the Environment has been trying to educate people on the balance between energy conservation and avoiding health risks by declaring July to be “Heat Stroke Prevention Month,” circulating a poster with countermeasures such as wearing lighter clothing and drinking enough fluids. The ministry website also includes a literal heat map of Japan, showing which areas are most at risk of high temperatures.

JMA forecasts a 50% probability of hotter-than-average summer temperatures from July to September. More unusually sweltering days means numbers of heat stroke patients taken to hospitals are likely to catch up to last year’s numbers quickly– 21,000 were hospitalized in the month of July in 2012, a record number since 2008. 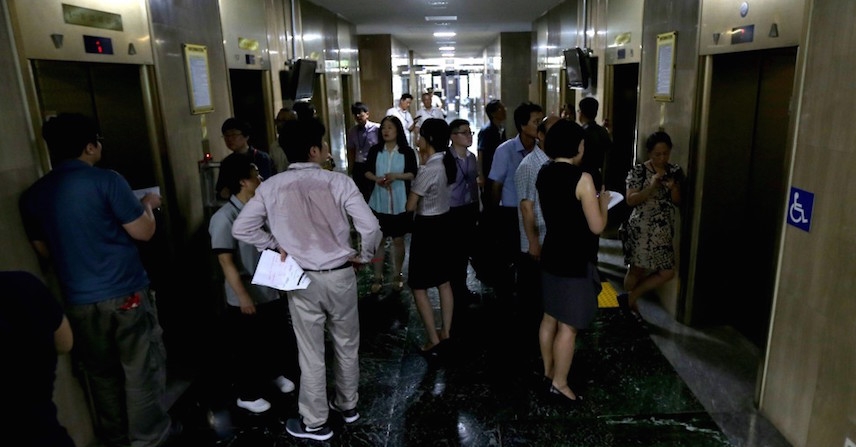